“It was in November 1942 that I developed a more than passing interest in HDMLs for the Drafting Office at Coastal Forces Training Base at Fort William had just decided that I was to go as the First Lieutenant of HDML 1230, then building at McGruer’s Yard in Clynder, on Gareloch. Together with Ken Hand, my new CO, I duly appeared at McGruers in the first week of December to find that HDML 1230 was still building on a slip. Within a day or so she had slid into Gareloch, helped by a bottle of fizz across her bows, and floated out to a mooring where Hand and I stored her in between “sea” trials using McGruer’s staff as crew. We picked up a largely Patrol Service crew from Helensbrough Pier,and then in the days following loaded depth charges and ammunition whilst attempting to work up a very mixed bunch of young men into a warship’s crew. On Christmas Day 1942, being considered “in all respects ready for sea and war”, we proceeded to Ayr off which port a fairly inebriated Gunnery Inspection team fired our guns and sent us on our way. Through the Arran Boom into the Irish Sea, by which time it was apparent that we were in for a rough passage. By nightfall the Coxswain had declared that “this was not what he had joined up for” and had retired to his bunk where he stayed for the rest of the voyage to Barry. By evening of Boxing Day we went in to Holyhead, only to be ordered straight out again. We made the centre of the harbour, dropped anchor and finally got some rest.

Appreciating that we were not exactly welcome in Holyhead, we were up early, got the anchor up and with it a very large electric cable that looked as if it might be of importance. Not having the gear to slip the cable Hand decided to sacrifice a CQR anchor plus half a shackle of cable so that we could depart without further fuss. The following morning found us, with a clutter of other small craft circling Barry Lightship waiting for a pilot, who eventually took us alongside in Barry Docks where HDML 1230 was to be shipped as deck cargo – we were not sure where.

A couple of days leave and officers and crew were together in a trooper bound for Algiers, but with one change. Our Coxswain had been removed and we had come by a Leading Seaman from the regular navy who understood that his job was to bring some discipline into our fishermen crew. The intention may have been there, but it was not very long before we had a good hard working, happy ML crew with but a distant relationship to the pusser Navy!

HDML 1230 arrived in Algiers shortly after her crew and soon after we were plodding across Algiers Bay, “Slow Ahead” on one engine on the inevitable harbour patrol. Dead boring, until one night, we had just turned under Cape Matifou when we heard an aircraft heading for Algiers, on a flight path which suggested that it was not one of ours. Our Engineman, who was taking the air at the Engine Room hatch, grabbed the Port stripped Lewis and, when the plane came overhead, opened a very controlled fire which appeared to be hitting. The plane disappeared toward Algiers and we reverted to boredom as we plodded across Algiers Bay. Alongside later in the morning, we began to pick up a buzz that an enemy bomber had been brought down during the past night and that its pilot had been shot up with .300 bullets. Our stripped Lewis was the only gun firing .300 that night, so a claim was submitted for one enemy aircraft destroyed. In due course, we had to share with an Army AA unit but we had a letter of congratulation from C in C on the Wardroom bulkhead, and half a swastika painted on the front of the bridge. Ship’s morale was also greatly improved!

Shortly after this we were told that we, with HDMLs 1236 and 1145, were to become minesweepers. Depth charges and smoke floats were landed to be replaced by a pair of Mk 9 Oropessa sweeps, to be worked through a mass of blocks and wire, from our winch which was on the fo’csle. Having shown that we could work the gear we were required to do a demonstration for the Press who were led by the local Press Officer Captain Taprell-Dorling RN (Rtd) who was better known as the author of Naval stories ,“Taffrail”. By the time we had the sweeps out, the Press was hanging over every rail, green faced, and very sea sick. Even the Press Officer, a destroyer man in his time, remarked upon the unusual motion of the HDML.

The reason for this change from Seaward Defence to Minesweeping was that, at last, Bizerta was to be occupied, with most of the required supplies for the occupying force going by sea. At a very late stage it had been appreciated that the opposition had been laying mines at a depth which meant that Algerines would not be protected, so wooden HDMLs, which only drew about 3feet, were required to go ahead of the main sweeping group. HDML 1230, as Senior Officer of 141 ML Flotilla (I think that was our number), would be the lead ML. Thus it was that, having got ourselves to Bone,

HDML 1230 found itself at sea heading a convoy for Bizerta made up of three HDMLs in front of two Flotillas of Algerines with their associated MMSs and drifters/trawlers, an AA cruiser, the convoy of merchantmen with their escorts, whilst over the horizon, making sure that we came to no harm, were HMS Howe and KGV, with their escorts. All on a lovely May morning with sweeps running true!

Convoy delivered, there seemed to be no one who wanted three HDMLs so we were told to sort ourselves out in Bizerta. We found a comfortable berth at a swimming club, secured beneath the diving board. After a day or two it was apparent that food was running out so I was despatched to improve the situation, only to find that no one seemed to be responsible for our three minesweeping HDMLs. We were however reminded that we still had some duty free, and that there were American landing craft near our berth, and that initiative should be used. It was, together with several bottles of Eau de Vie de Prunes which had been come by in our travels. After that, we ate fairly well and had many American friends!

One cannot have three small warships hanging around a bathing beach for too long before someone decides that they ought to go off and patrol to seaward – or at least across the entrance to Bizerta – so we started to do slow ahead on one engine accordingly but, my recollection of that time some 67 years later is that it was all a bit casual. We went through the motions but little more. Coming in one evening from such a day we met HDML 1154 on her way out to relieve us. We did not know her, or her company, having never worked with them before but, we stopped alongside, had a brief chat about what had happened on our patrol, passed over some Duty Free as they had run out, and went our separate ways. Next morning, as we went out, some unusual activity was observed ashore and we heard that ML 1154 had disappeared. A body part and a bundle of letters had been recovered, but nothing else. An explosion had been heard during the night but the initial concern was that the ML had been fired on by an American Army battery from ashore. It is only recently that I have seen the official cause of her loss given as Mined.

It was about then that the Algerines working around Cape Bon had “Fantome” damaged, and an MMS sunk and decided that they would like to have the HDMLs back again. So, most mornings, the HDMLs would lead the first two cuts into a minefield, then break off, recover their gear, and become dogs bodies for the Algerines for the rest of the day. Basically, we sank moored mines that had been cut – we became quite accurate with our rifle fire – or recovered sweep gear from the Algerines that had come adrift for any reason during the day’s sweeping. Then we would return what we had recovered to the appropriate ship in the evening. That done we moved at the beck and call of the SOs of the Algerines – mail, people, equipment, you name it, we moved it. As a variation, one or other of the HDMLs would go into Bizerta, or be sent round the coast to do a recce of a bay which might be used as a night anchorage in the future, which meant a single ship sweep to ensure that it was reasonably mine free. I see also from some letters of that time that we were, on one occasion, given a small convoy of our own to sweep through on their way to Malta.

There was also the matter of “Irene” the Walrus. On one of our independent runs we had come across a Walrus amphibian floating unmanned and we had been told to take her to Sousse. Now, how to tow an amphibian had not been included in either the King Alfred or the Fort William training. Nor had how to steer an amphibian whose controls one does not understand. So, having secured “Irene “ astern, with a crew of two sailors, we set off for Sousse – where we did eventually arrive to deliver our tow to the RN but only after a very zig zag journey, much foul language, and the odd laugh. Again, it is only within the past year that I have come across a possible explanation as to why an apparently undamaged RN aircraft was floating around the Med. I think that she had been on an air sea rescue, had been unable to take off with the rescued air crew, so had been driven across the sea until either fuel ran out, or a rescue launch took over her crew and passengers.

At Sousse we were required to lead a minesweeping group for the occupation of Pantellaria. We did a dummy run to within sight of the island, and then the Italians decided to surrender, so there was no need to do the operation seriously.

After that, back to our Minesweeping Group to find that changes were afoot. Someone in the distant Admiralty had decreed that HDMLs could work quite satisfactorily with but one officer so, all the First Lieutenants in North Africa seemed to be being removed and sent elsewhere. John Stephenson had already left HDML1145 for the Aegean, whilst I was on a Draft List to proceed to HMS Tana. By the end of June 1943, HDML 1230 was on her way to Malta and I was beginning to hitch hike to Mombassa.” 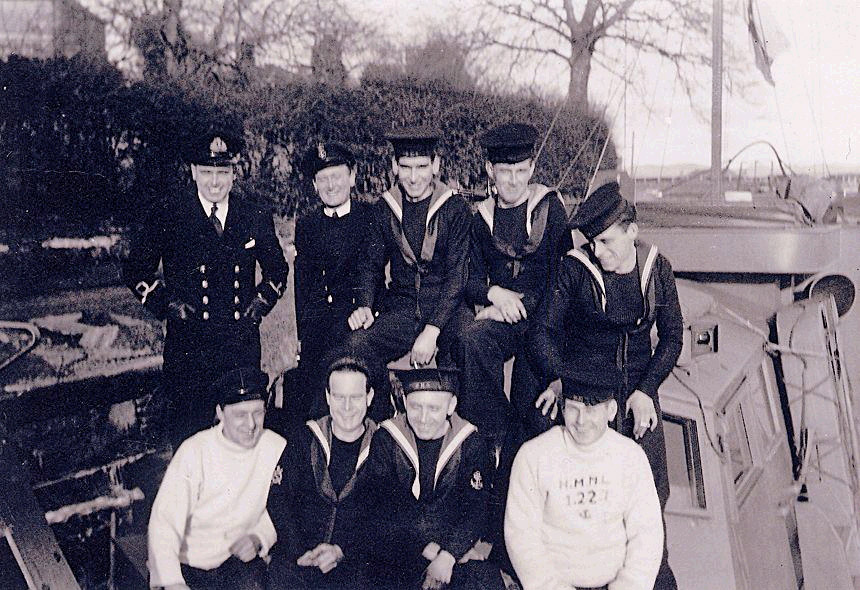