The design of the HDML was by W. J. Holt, Chief Constructor of the Naval Construction Department, Admiralty. The text that follows is his description of the vessel, extracted from a paper he presented in 1947 dealing with the construction of a variety of Coastal Forces craft.

A design of a small motor launch, for protection of harbours and estuaries against submarines, was prepared in the Admiralty in late 1939. The staff requirements were for a craft not exceeding 72 ft in length and capable of being carried aboard the deck of a ship.

These craft had the following dimensions:

The figure below shows the design outline: 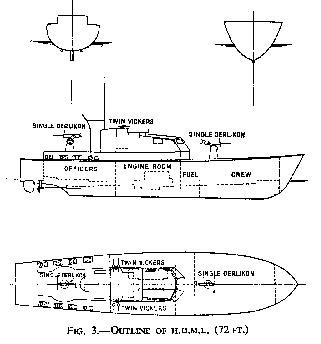 The boat was round bilge form and was provided with two large rudders to ensure quick turning during an anti-submarine attack. The boats were fitted with two diesel engines, manufactured by either Henty and Gardner (150 HP each), Gleniffer (160 HP each) or Thornycroft (130 HP each). The engines gave the boats speeds of between 11 and 12 knots on 54 tons displacement.

The hull was of double diagonal planking with bent transverse timbers outside longitudinal stringers and with reinforcing bent timbers at intervals inside the stringers. This system of planking proved itself resilient and strong. Early boats were planked with mahogany. When mahogany became scarce, it was necessary to use larch for planking, and in some cases this lead to leaky boats. The use of larch was discontinued immediately the supply position for mahogany improved.

The craft were armed with one 3 pdr. Gun forward, one Oerlikon aft, two Lewis guns on pedestals, and eight depth charges. Asdic was fitted.

Fuel tanks were provided for 1250 gallons in the main tanks and 300 gallons additional in the engine room. The HDMLs had an endurance of about 2000 miles at 10 knots.

Accommodation was provided for two officers, two petty officers and eight ratings. The wheelhouse in early boats was fitted with protective plating, but in later boats the bridge was armoured instead of the wheelhouse.

Orders for these craft were placed with yacht builders having well equipped yards, since, with the exception of fittings such as the steering gear, shaft brackets and rudders, the boat builder was required to provide the whole of the hull fittings and material.

HDMLs saw service in all operational zones and were generally used for similar service as the Fairmile B MLs. The early vessels were shipped to their destinations aboard. Subsequently, arrangements were made for the vessels to proceed on their own keels, as shipping capacity was no longer available.

To make them suitable for service in the Mediterranean and tropical stations, all HDMLs were sheathed in copper. A few boats were fitted for service in Iceland, and were provided with additional heating and insulation. The boats proceeded to Iceland on their own keels.

Eight vessels were required for service in the West Indies. To ensure they could make the long passage from the Cape Verde Islands to America, they were given an outfit of sails. Two tabernacle masts were fitted. The foremast carried a standing lug and jib and the mizzen a standing lug. A large square sail was provided for running before the wind. The passage across the Atlantic was not made as these particular HDMLs joined in the North Africa landing operations after arrival at Gibraltar.

Later boats were fitted so they could tow one leg of an Oropesa sweep equipment , for mine sweeping in sheltered waters. Numbers of boats were fitted out as navigational leaders for assisting landing craft, and were equipped with radar.

The HDMLs made a great reputation for themselves. They were sea kindly little craft and their engines were very reliable. The actual service was far beyond anything that was visualised when the staff requirements were outlined. The MLs rendered great service during the evacuation of Crete. They played their part in the landings in Normandy, Sicily and the Arakan. They were used as convoy escorts off the North and West coats of Africa.

Later in the paper a comment is made on stability…..

On the high seas, Mls are small in relation to the sea they encounter; they are also light and have little grip on the water. In consequence they are thrown about and knocked over by the sea in a manner not experienced by larger ships nor even by the relatively small but heavy and deep draught vessels such as trawlers.

Anyone who has been to sea on an HDML would agree with the above!