Medusa was laid down as HDML 1387 at the yard of R A Newman and Sons in Poole, Dorset, on 27th July 1943, and launched on 20th October 1943. She was powered by two Gardner 8L3 diesel engines and was equipped with a Gardner 1L2 auxiliary. Her armament was a 2 pounder and a 20mm Oerlikon, with two twin Vickers ‘K’ machine guns, and six depth charges. For submarine detection she had Type 134 ASDIC and also a Type 286 radar.

Under the command of Temporary sub-lieutenant Maurice Liddiard, RNVR, who commanded her throughout her war service, she was initially involved in convoy escort work in the Western Approaches. In the spring of 1944 she joined the 149th HDML Flotilla, was based at Portland, and took part in Exercise Fabius 1, which was a practice assault carried out by the Americans at Slapton Sands in Devon.

Medusa played a key role in the ‘D’-Day landings, arriving off Omaha Beach on the night before the invasion and remaining on station for 30 hours as the Navigational Leader for approach channel 4 marking the entrance to a narrow swept channel through the German minefield.

Post D Day, Medusa moved to Scotland, working out of Granton as escort to a minesweeping flotilla. In October 1944, Medusa was transferred to the 185 Auxiliary Minesweeping Flotilla, based on the Medway.

Early in May 1945, Medusa crossed to Ostend and from there took passage to IJmuiden where she accepted the surrender of the occupying German forces. From IJmuiden she navigated the North Sea Canal to Amsterdam, the first allied ship to do so and was there for VE Day on the 9th of May. 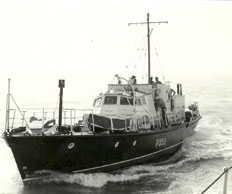 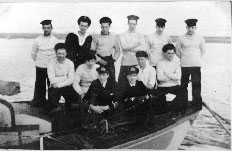 Post war, Medusa was re-designated a Fast Despatch Boat (FDB) 76 and was allocated to Cardiff University, and then Bristol, as a training vessel. In 1949 she was allocated to London Division RNVR and temporarily assumed the name HMS Thames. Whilst in London she was re-designated Seaward Defence Motor Launch (SDML) 3516. In 1953 she became an Hydrographic Survey Vessel with the pennant number A 323, and was finally named HMS Medusa in 1961.

In 1968, after 25 years’ service and the last of her class in naval service, she was sold by the Admiralty in a condition they considered fit only for the breakers. She was purchased by a group from Weymouth, led by her captain for the next 45 years, Mike Boyce, and then, over a period of 18 years, was painstakingly restored to a seagoing condition, such that her life was extended to more than 60 years.

The Medusa Trust was formed in 2002 to take ownership of the vessel, and raise funds for a major restoration programme. At the same time the Medusa Support Group was formed and now provides volunteers for maintenance, crew for the vessel when she goes to sea as well as guides to show visitors around the vessel in port.

Medusa is in the national historic fleet and is the first vessel to fly the fleet red ensign. A booklet covering the design and construction of Medusa and her history is available from the Trust.

Medusa, then ML1387, was ordered on 30 November 1942 as part of a batch comprising ML1376-1397 under contract CP93724/42 and built by the firm of R A Newman, Hamworthy, Dorset. The slipway she was built on still exists as part of the Sunseeker boat building yard just downstream of Poole bridge on the Hamworthy side. She was launched on 20 October 1943 and commissioned on the 29th of December 1943. 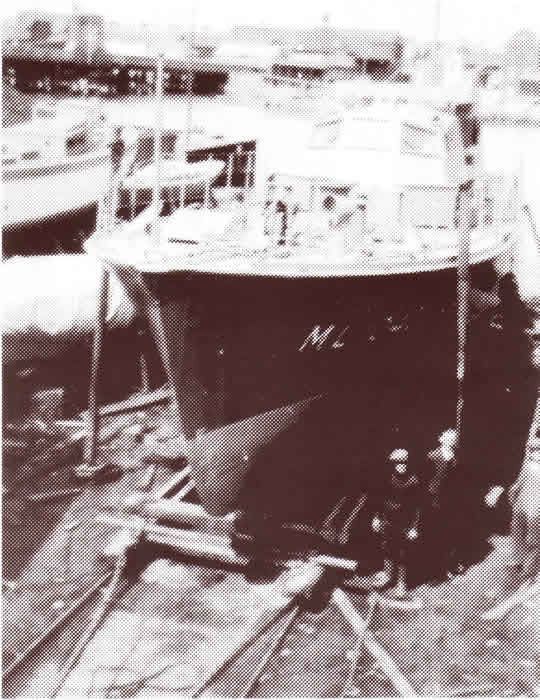 Slipway at RA Newman. with Poole bridge in the background

HDMLs had a crew of 12. Medusa had two officers, both Royal Navy Volunteer Reserve (Wavy Navy), two Petty Officers and eight others.

Those we know of are:

Medusa was originally intended to go to the Persian Gulf, so, unlike those for home waters, she was copper sheathed below the waterline and was finished in a pale blue livery. She remained at Poole until the end of January 1944 when she went to HMS Seahawk, Ardishaig, for crew training and workup. En-route she was a convoy escort but was caught in a storm and given permission to shelter in Milford Haven. Her cox’n was a local fisherman and was able to pilot her in.

According to the Falmouth War diary, she arrived from Plymouth on the 29th April.

On the 3rd May, Medusa was part of the screening Force for Exercise Fabius 1, which was the rehearsal for Omaha conducted at Slapton Sands. On completion of this, in bad weather, she went into Dartmouth and was berthed alongside a Fairmile B, coincidentally the one that her captain had served on as a telegraphist before officer selection and training. From Dartmouth she went back to Falmouth.

She sailed from Falmouth for Plymouth on May 16 escorting two US tugs LT2 and LT4 each towing an oil barge. She departed Plymouth on 27 May 1944 for Portland as part of the 149th flotilla.

Portland was the main departure point for Omaha and was packed with craft. On the 2nd June, Medusas officers went to the cinema in Weymouth to attend a briefing. On their return the ship was sealed ready for D Day.

Detail of the D day operation is at Medusa D day role and this narrative picks up again in July 1944. 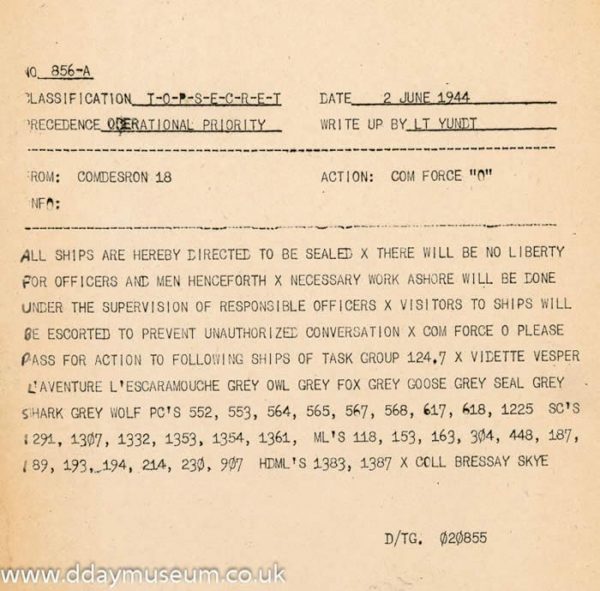 On 2 July 1944 Medusa is back in Falmouth with ML1387 and on the 9th sails for Portsmouth. There is no record of her movements over the next weeks other than a note that “the flotilla is dispersed along the South Coast, several in repairs at Poole, Dover and Southend”.

On 1 October she is detached from the flotilla and sent to Granton (Edinburgh) where she becomes part of the Minsweeping Auxiliary Group 185 together with HMS St Olive and HMS Windward Ho. During this period she was damaged by one of her own depth charges while attacking a submarine.

3 December saw her on passage to Sheerness with the minesweepeing group and operated from there. 11 March, St Olive went in for repair so just operating with Windward Ho. On 8 April she went into Gillingham for repairs, completing on 16 april After which she continued to operate out of Sheerness.

In early May 1945, she escorted two water barges from Southend Pier to Ostend and then patrolled to Scheveningen, Holland and on to Ijmuiden which was still occupied by German forces waiting to surrender. HDML 1387 accepted the surrender of German forces in Ijmuiden. An armed sentry, in best uniform was placed to patrol the jetty but he tripped over a warp and dropped the boat’s only rifle into the harbour.

HDML 1387 transported a party of senior officers up the North Sea Canal to Amsterdam as part of the surrender process on 7 May 1945. The canal was onstructed by sunken vessels and booby traps. She negotiated a sunken blockship by sending the boat away, with AB Harry Andrew embarked, to take soundings around the wreck to find a channel and was the first allied vessel to enter the city.

She returned to Sheerness, arriving pm of Thursday 7th June 1945.

In September 1945, she was back at Portsmouth attached to the depot ship HMS Marshal Soult until 29 January 1946.