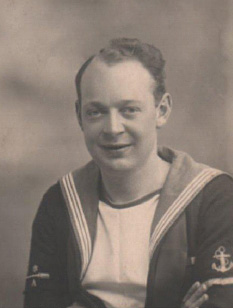 “Once we had commissioned the boat and provisions on board, we sailed down the Broads to Lowestoft. By that time it was late January 1942. It was a cold winter with lots of snow around. I had just been to the naval base for a bath when the air raid sirens sounded on my way back to the boat. The wind was blowing and it was snowing, when out of the swirling snow came a German aircraft at zero height, machine gunning. I lay prostrate in the snow and just hoped for the best. Luckily I was unscathed. A couple of days later and still tied up alongside a sea wall, the sirens sounded again for some reason I can’t remember. I was one of a few that was on board at that time, but no officers. I had just armed myself with the Lewis gun and put the ammunition pan in place, when sure enough a German bomber, a Heinkel 111, came in view at a height that could just about be in range, so I fired the Lewis gun from the shoulder at the hostile plane, but alas nothing came down. Thus were my first shots of anger duly dispatched. I was not aware then of what was to follow in the next three years.

We were soon on our way, leaving Lowestoft for Great Yarmouth on our journey to our destination, which turned out to be Granton on the Firth of Forth, in close proximity to the Forth Bridge where our duties would be boom defence. We stayed at Great Yarmouth for a couple of days. It was here I had my first good fortune. Alongside us was moored a brand new ML, as was our boat. That ML was going down to Cornwall, our boat to Scotland. A seaman from the ML got in conversation with me. He was a Scotsman, and he asked me if I would change boats with him so that he could be near home. It seemed to make no difference to me, so I agreed to his suggestion, but my Captain would not let me go. No one knew that three months later that ML would be one of fifteen MLs, one MGB and one MTB and an ancient destroyer that were to take part in the raid of the French port of St Nazaire.

On route we encountered storms and heavy seas and being new to the sea I found it difficult to do any sort of duty because of sickness. I found that my stint on the wheel (steering the ship) gave me most comfort. Eventually we took shelter in Bridlington Bay in the Lee of Flamborough Head for twenty-four hours until conditions improved. The next leg took us to Blyth where once again we took shelter from the storm. In the middle of the night the air raid sirens sounded. By that time we were tied up alongside the quay. German bombers were soon to be heard droning high in the night sky, the wavering pitch of their engine noise immediately identifying them. The anti-aircraft guns were firing and searchlights pierced the darkness in thin long beams. Bombs were falling in the distance, when all of a sudden there came this loud crunch and a flash — a bomb had just missed us and exploded in the water. Luckily that was the only one that came our way. The next morning we were on our way again, but only as far as Berwick on Tweed, the last town in England. Quite why we called there I don’t know, but I have a recollection of a long stone bridge with many arches. Then finally to our destination, Granton, from where we sailed to our station off the Island of Inchkeith, to pick up radio signals and hydrophone watches.

To put it in a nutshell, it was a ‘cushy job’. When back at base there was shore leave, which in my case was spent in nearby Edinburgh, usually dancing at the Palaise. All this was short lived and my honeymoon period was drawing to a close. HDML 1060 was taken to dry-dock at Leith, where the crew were paid off and we were drafted down to HMS Attack at Portland in Dorset, around the end of May. l understand HDML 1060 had a copper bottom fitted and armaments updated and was shipped out to the Far East where she did not survive the war: another let off.” 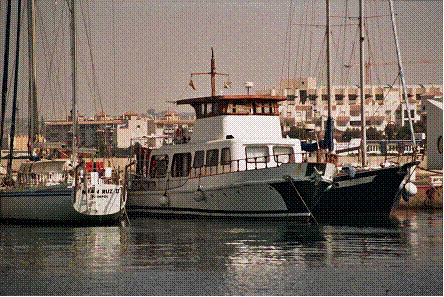