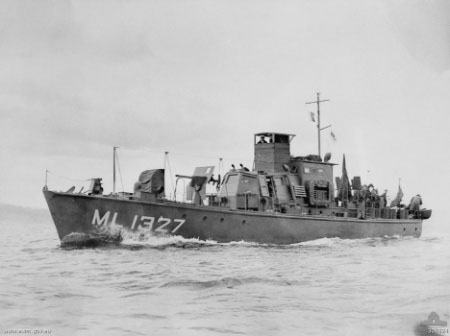 Recollection of E B Hopkins…

“The voyage of 1327 from Hobart was going to be a rough one from the start and when I got my sailing orders from NOIC Hobart, the weather was so bad that it was blowing trees out of the ground at Launceston, with gale warnings in Bass Strait. I had the sense to get a weather report from the RAAF in Hobart and then went to see the NOIC to defer sailing until better weather. Captain Farquhar-Smith, the NOIC told me that in all his naval career, weather did not stop him from sailing. I pointed out that he had served in cruisers and I was sailing an 80 foot HDML. He blew his top and told me to get aboard my ship and sail. You remember that we had a rough trip up the east coast and sheltered in the Bay of Fires, and because of the water coming in over the generator, I sent a signal that I was returning to Hobart. NOIC was furious as I made sure the signal was repeated to ACNB Melbourne. Our return was vindicated when Purdon and Featherstone, the builders, found that the sea water entered the engine room through leaks in the wheelhouse plates.

When we arrived in Sydney after that rough and very eventful voyage from Melbourne, I put 1327 alongside at Rushcutter and went home. When I came aboard on Monday morning, I was met by Reg Evans (the First Lieutenant) who was in a bit of a state. He had been given a blast by the Depot First Lieutenant for having washing strung out on the forecastle drying on Sunday against Depot Standing Orders… the First Lieutenant of the depot requested my presence as soon as I came aboard. This I did and he proceeded to tear a strip off me for firstly putting 1327 alongside bows-in instead of stern-first and then carried on about the washing. I lost my block and informed him in no uncertain manner that we had lost a man overboard, had a bloody rough trip from Melbourne, that the crew had been wet through and there was a foot of water in the messdeck and as far as I was concerned I couldn’t care less about how the boat should be berthed as I arrived at night and I was only too pleased to secure it and the crew alongside safely.

Before a court martial could be arranged, the captain of the base, Captain Newcombe came up. He knew me pretty well when I was at the A/S School and remarked “Hello Hoppy, I understand you had a rough trip. Commodore – Garden Island has your report on the man overboard and voyage and asked me to commend you on your search plan and good seamanship in rescuing him”.
Never had any more trouble from the First Lieutenant of Rushcutter.” 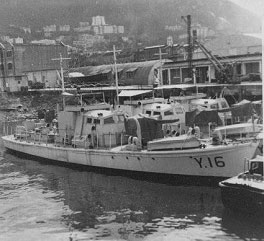